Turkish Coffee: From Ethiopia to Bosphorus

Coffee is a beloved drink and has a special place in the Turkish culture. A fruit indigenous fruit to Ethiopia, it has a long story before it became to be known as the “Turkish Coffee”.

Coffee first appeared as a food item, then it became a drink. Out of Ethiopia, it first made it’s way to Yemen, then on to Mecca and Egypt, lands all of which were within the Ottoman Empire then. Early consumers of coffee were sufi’s, Muslim mystics who used it as a stimulant and benefited the energizing effects to resist sleep over the nighttime devotions.

Coffee must have reached Istanbul during early 16th century or before as by mid 16th century there were already laws and disputes about consumption. The disputes were due to two clashing opinions, some considered coffee consumption as an essential part of prayer and reflection, while others claimed it must have been forbidden by religion as gossip, vulgar language, gambling and other culturally and religiously unacceptable behaviors became common at coffee shops.

Ottomans allowed coffee surplus to be sold to Europe, as a result coffee consumption spread. First coffee shop of Italy was in Venice, probably dating back to first half of the 17th century.
Popularity of the drink triggered colonial production and by the 18th century “new coffee” was a mass traded item.

While coffee impacted many cultures, Turkey is the only that a meal was created for sake of it’s consumption coffee. Turkish word for breakfast is “kahvaltı” meaning “before coffee”, a meal that did not exist but created so people can take a bite before coffee!

For Turks, coffee is a digestive drink after the meals. “Turkish coffee” is not a different plant, but pure Arabica beans from Ethiopia and Yemen, what makes it the “Turkish coffee” is the roasting, grinding and cooking of it. Turkish coffee needs to be a dark roast grinded very finely, almost to powder form and cooked slowly using a small pot called “cezve”.

Here is the recipe:
• Get a cezve, if you don’t have one use the smallest pot you have at hand. 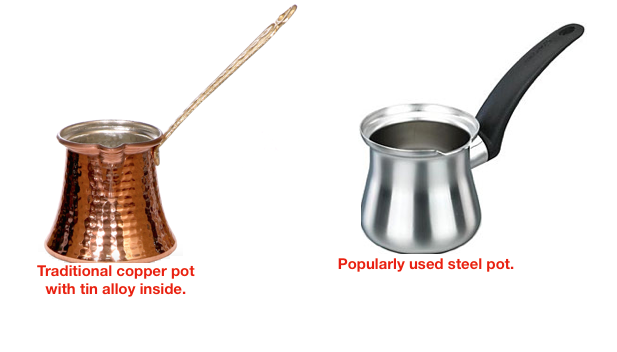 It is common to see the traditional pot at the restaruants, especially those receiving international clientele, but nowadays Turks use steel pots at home.

• Use your cup to measure the amount of water and put the water in the pot. Turkish coffee cups are very slightly larger than espresso cups. Ideally, cook one or to cups of coffee in a pot, as if you cook more, this means you will have to split the foam (better known as cream in Western cultures) that accumulates on top to more number of cups, but Turkish coffee is more palatable and desirable with more foam. 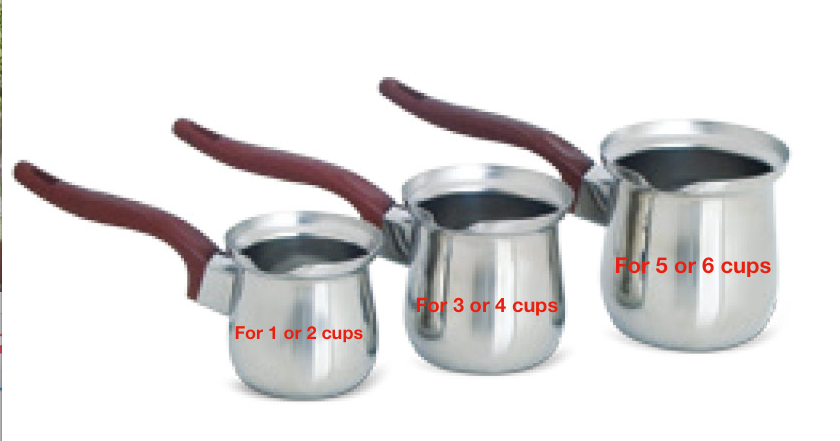 Commercially 3 different sizes of coffee pots are available and usually they are sold as a set.

• If you like any sugar in your coffee this is the time to put it in the pot. You can’t add any sugar to coffee once it starts to cook or after it cooks, it always needs to go in the pot right after the water. For medium amount of sugar, one sugar cube per cup will suffice. If you have a sweet tooth, you can add two cubes per cup. Probably, you already figured it, if there are two people to drink coffee and one wants it black and other with sugar, it means that they have to be cooked separately!
• After the sugar, it is the time to add the coffee in the pot. Right amount of coffee per cup is one tea spoon full, roughly 6 to 7 grams.
• Then, with a small spoon (smaller than tea spoon, size of an espresso spoon), stir all until the sugar melts and clumps of coffee are broken up.
• Put the pot on top of low heat and let it cook slowly. Don’t stir, just watch so that it does not overcook and boil.
• Before the coffee reaches to a boiling temperature, you will notice that tiny tiny bubbles are forming the foam and it is gathering on the surface, this is the time to move the pot from the heat and pour the foam into the cup. Fill the cup only half way, with the foam.
• Replace the pot on the low heat once more, and cook till the coffee comes to a boil, then remove the pot immediately off the heat and fill the rest of the cup! 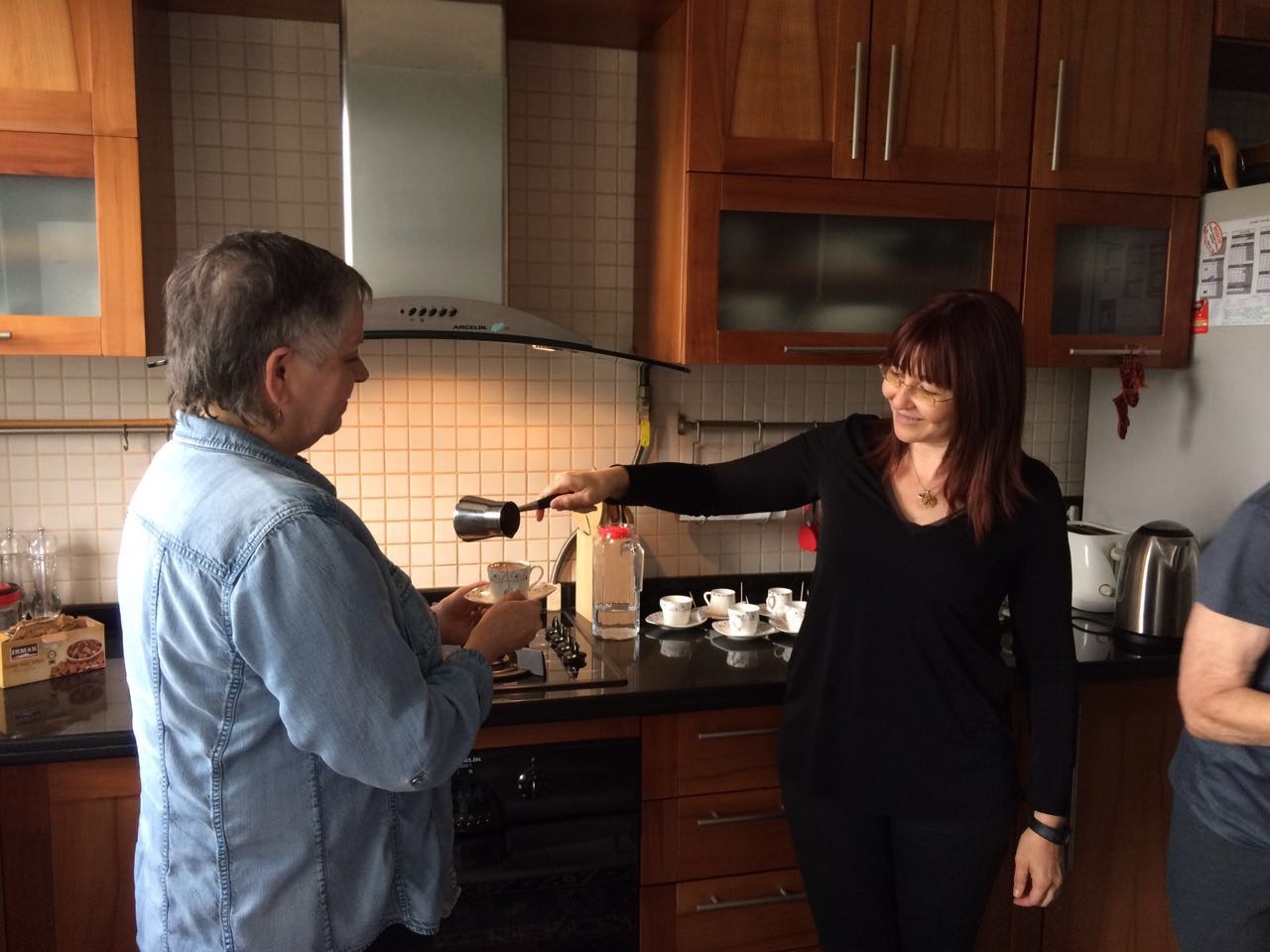 Pouring the coffee in to the cup.

Hints:
• All the guests need to be served with equal amount of foam in their coffee, otherwise is against the hospitality. You can do this by either distributing the foam with a spoon to the cups before pouring, or with skillful pouring. This will not affect the taste, but the appearance of each cup.
• Serve the coffee with a small glass of water so the drinker can cleanse her/his palate. Small piece of Turkish delight is a good assortment to serve along.
• Don’t stir the coffee when you are drinking it, the coffee grounds are supposed to sink to the bottom of the cup.
• Enjoying coffee with a good story teller is much more fun as “reading” the coffee grounds at the bottom of the cup is an entertaining form of fortune telling!