Why travel to Istanbul?

Based on reviewers of TripAdvisor number one destination of the world is Istanbul, beating fancy names as Rome, London, Paris and countless others. I value this rating much as it is based on reviews of real travelers rather than generously paid and sponsored travel journalists. Yet, latter also agree on this review, during the past year articles about travel to Istanbul was everywhere, including prestigious Condé Nast Magazine.

I want to start with quotes of Napoleon Bonaparte and Edmondo De Amicis. Napoleon said “ If the earth were a single state, Istanbul would be its capital” and  De Amicis continued saying “Istanbul, a universal beauty where poet and archeologist, diplomat and merchant, princess and sailor, northerner and westerner screams with same admiration. The whole world thinks that this city is the most beautiful place on earth”.
In Turkish, there is no gender specific pronouns*, everything is neutral. However, talking about Istanbul in English, I feel like using “she”, the city feels feminine to me. She is nourishing and has an amazing endurance, besides being beautiful. So, it is “queen” of all cities:) 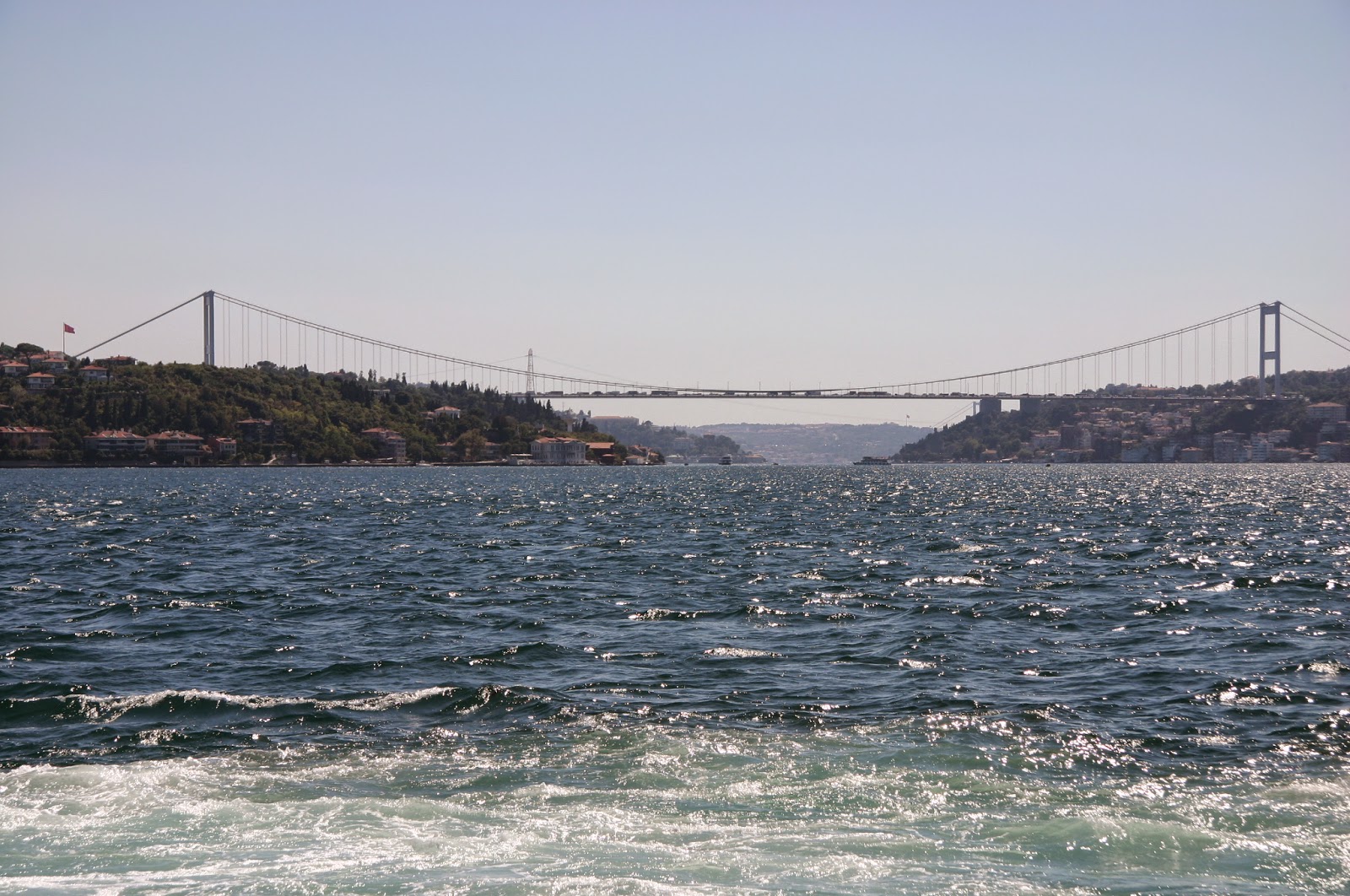 Photos of Istanbul I love are the ones that reflect the diversity, but not the monuments only. This is the photo of the second suspension bridge on the Bosphorus. On the left, with the Turkish flag is the Asian continent, on the right is the European continent. Fact lovers may enjoy knowing that the bridge was the 5th longest of the world when completed in 1988, today it is the 19th longest. 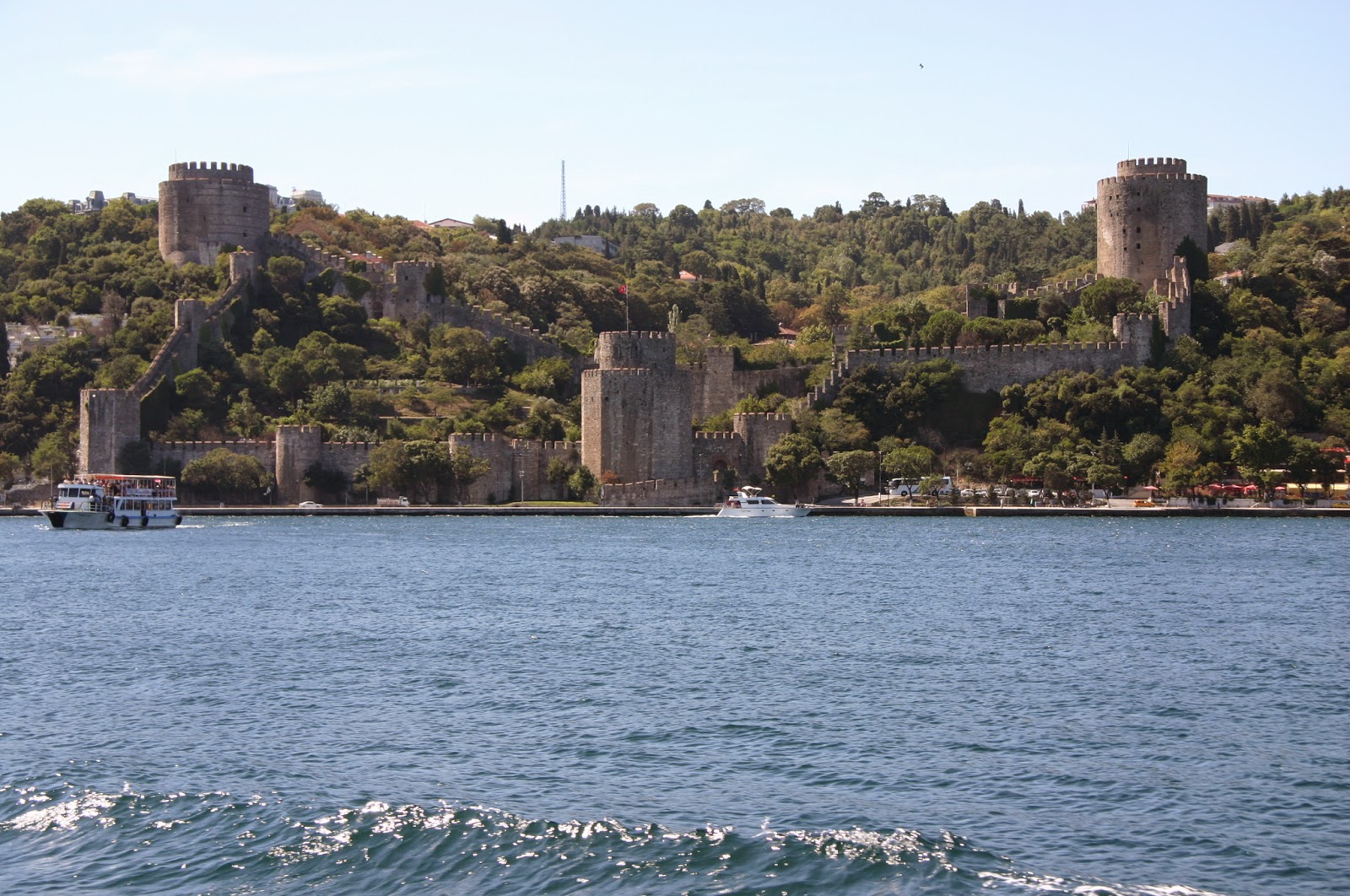 The mighty Rumeli Fortress from the 15th century, it was built as a cut-throat fort to the northern end of the Bosphorus.
So, why is this? Why did travelers rated Istanbul as the top destination of the world? If I am to sum all in just three words, I would say, location, history, diversity. In these three aspects, city is unique, simply matchless, full stop.
City is on both sides of Bosphorus straight which divides Europe and Asia. View from the shoreline is another continent, that is Istanbul. Imagine yourself looking from the shores of New York city and seeing London or Rome across! Bosphorus is the only outlet of the Black Sea, so without Bosphorus, not much in Black Sea and in countries surrounding it. This appealing strategic fact is not important only today, but it was reason of the draw to Istanbul thru the history. 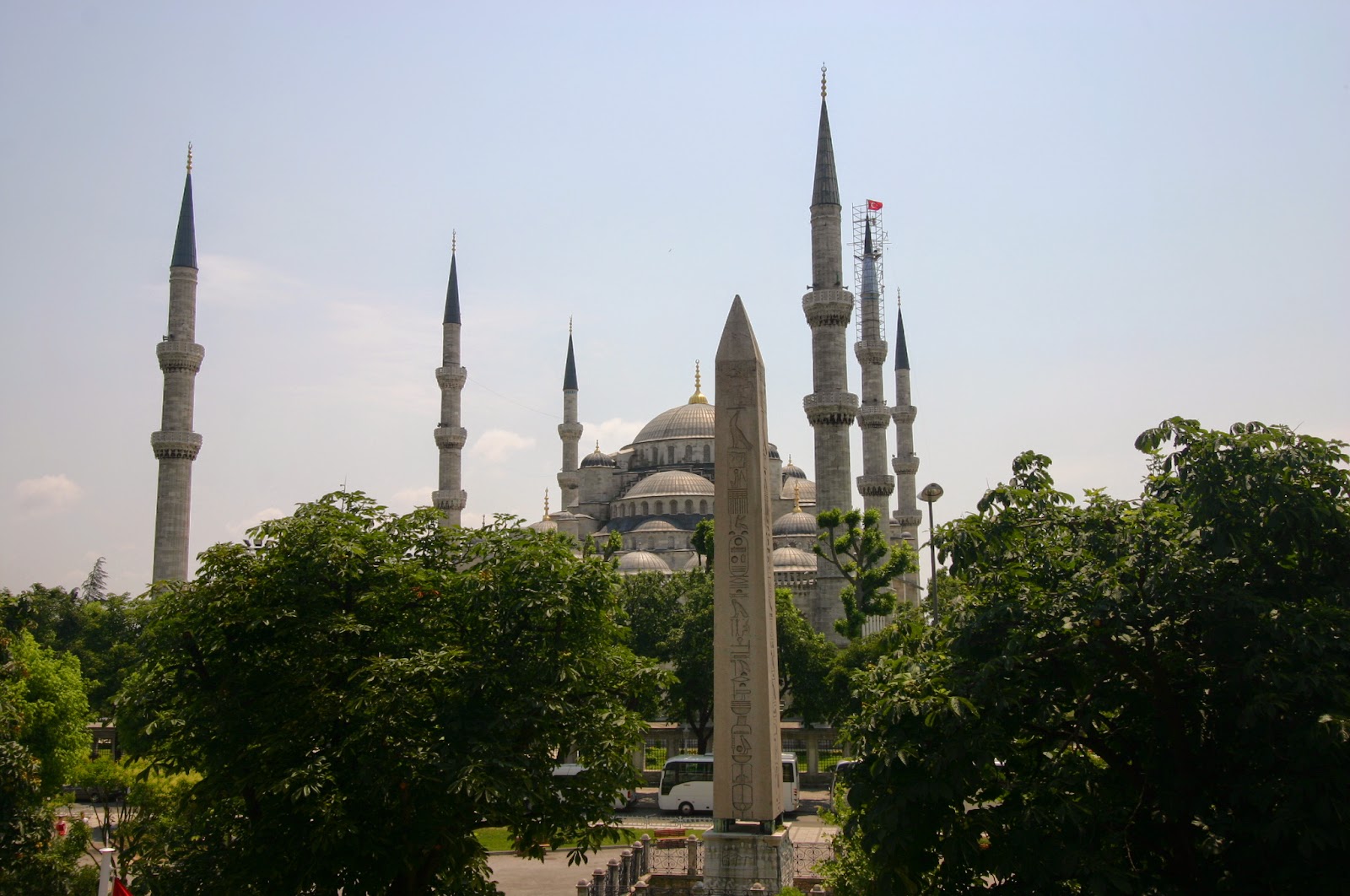 Egyptian and Ottoman together. In the fore ground, there is the Egyptian obelisk brought from the Temple of Karnak to decorate the Hipodrome. The structure at the back is the Blue Mosque from the 17th century with it’s six minarets (mosque towers are called minarets).
In the past, numerous civilizations called Istanbul home. She had many names; the Greek settlers called in Byzantion after the man who led them to this geography; Constantine the Great proundly called it Nea Roma abondoning Rome as capital and embracing this city instead. During the Byzantine Empire, while actually it was the eastern continuation of Roman Empire, people called themselves Byzantines after the legendary founder of the city and called their capital Constantinople after the name of the great man who adored it. At first, Turks called it Constantinople in Turkish and that is Konstantiniye and later picked up the name Istanbul which actually is a deformed way of saying “to the city” in Greek. 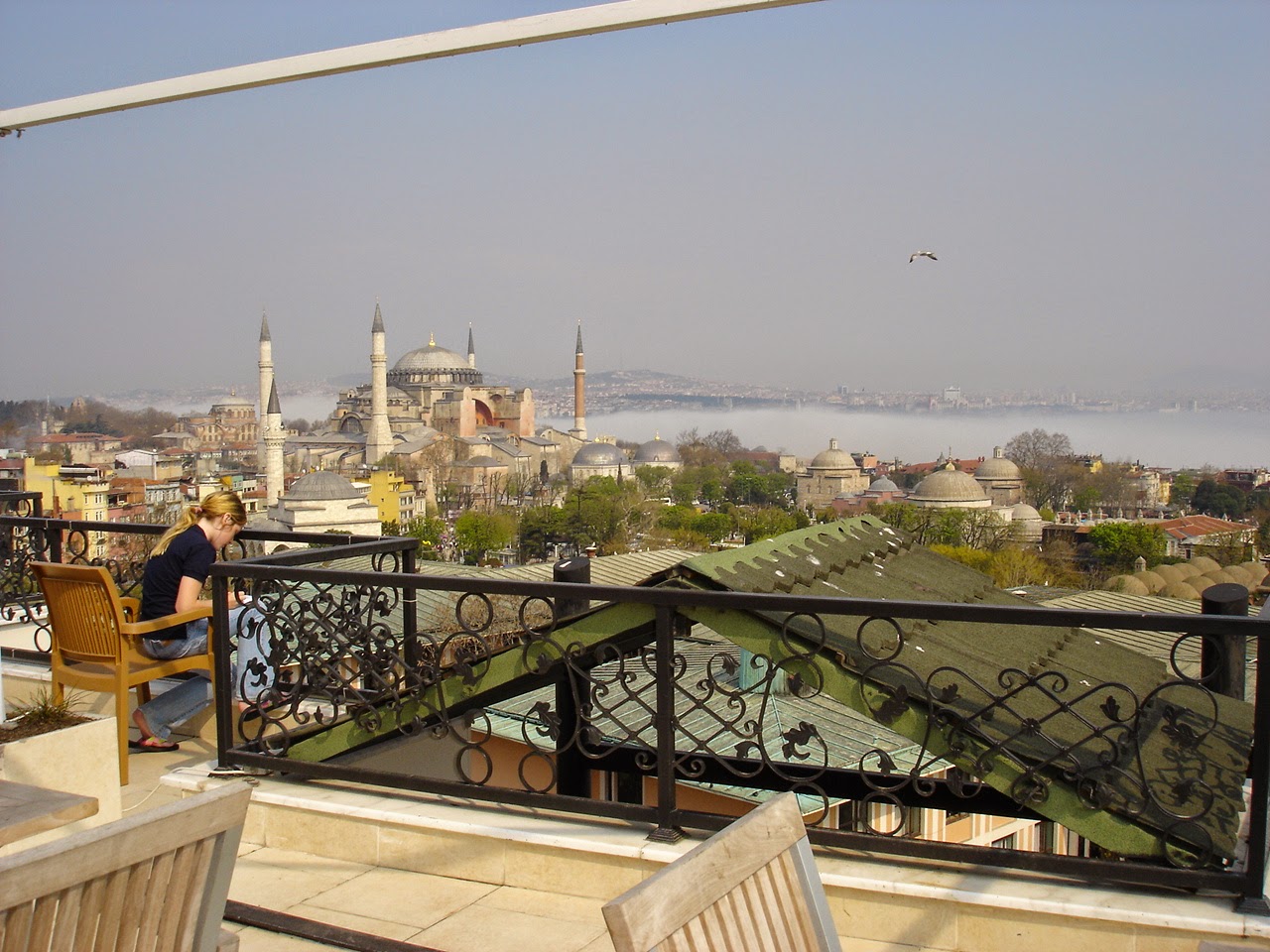 Hagia Sophia Cathedral with the dome was built in the 6th century. It stood as the only major dome of Christiandom until the Reneissance. Minarets  surrounding the dome are Ottoman additions to the structure.
Istanbul is a historical and cultural baklava with layer on layer, each as delicious. The many names of the city stand witness to the greatest of civilizations that left marks here. It is mind blowing to see monuments of them almost side by side. To make another analogy, imagine pyramids of Egypt next to Statue of Liberty. Monuments of Istanbul are not only from different civilizations they are also from different periods in the history.
One of my most popular places in the city to sit, relax and think of all this are the benches in the park between the Hagia Sophia Cathedral and the Blue Mosque where I can see both. Former is the top example of Byzantine architecture and latter is an excellent representative of Ottoman religious architecture. With their majestic domes, they echo one another. 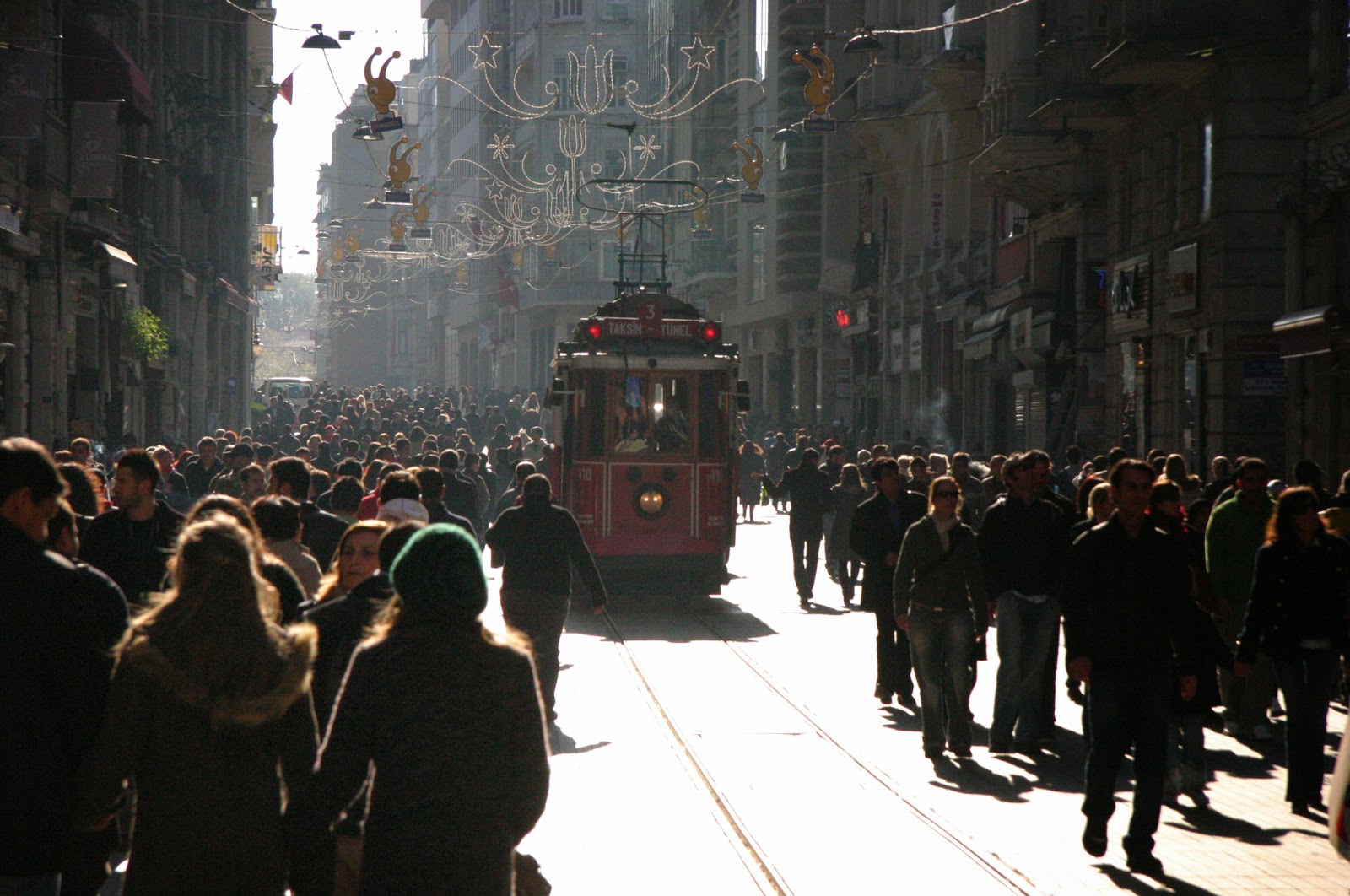 The Istiklal Street, main pedestrian drag of the city with a nostalgic tram running thru.
During the past two decades amazing investments took place in Istanbul, giving it a great infrastructure for visitors. Hotels and restaurants are numerous; transportation is easy, one tram line swinging by most of the highlights.
While I used to complain of the prices as a native, I started biting my lip after a recent trip to Seattle and Florida in January of 2015, where we paid about 2 USD for a small bottle of water. Today, Istanbul is more expensive than what it used to be, but still less expensive compared to popular European or US counterparts. 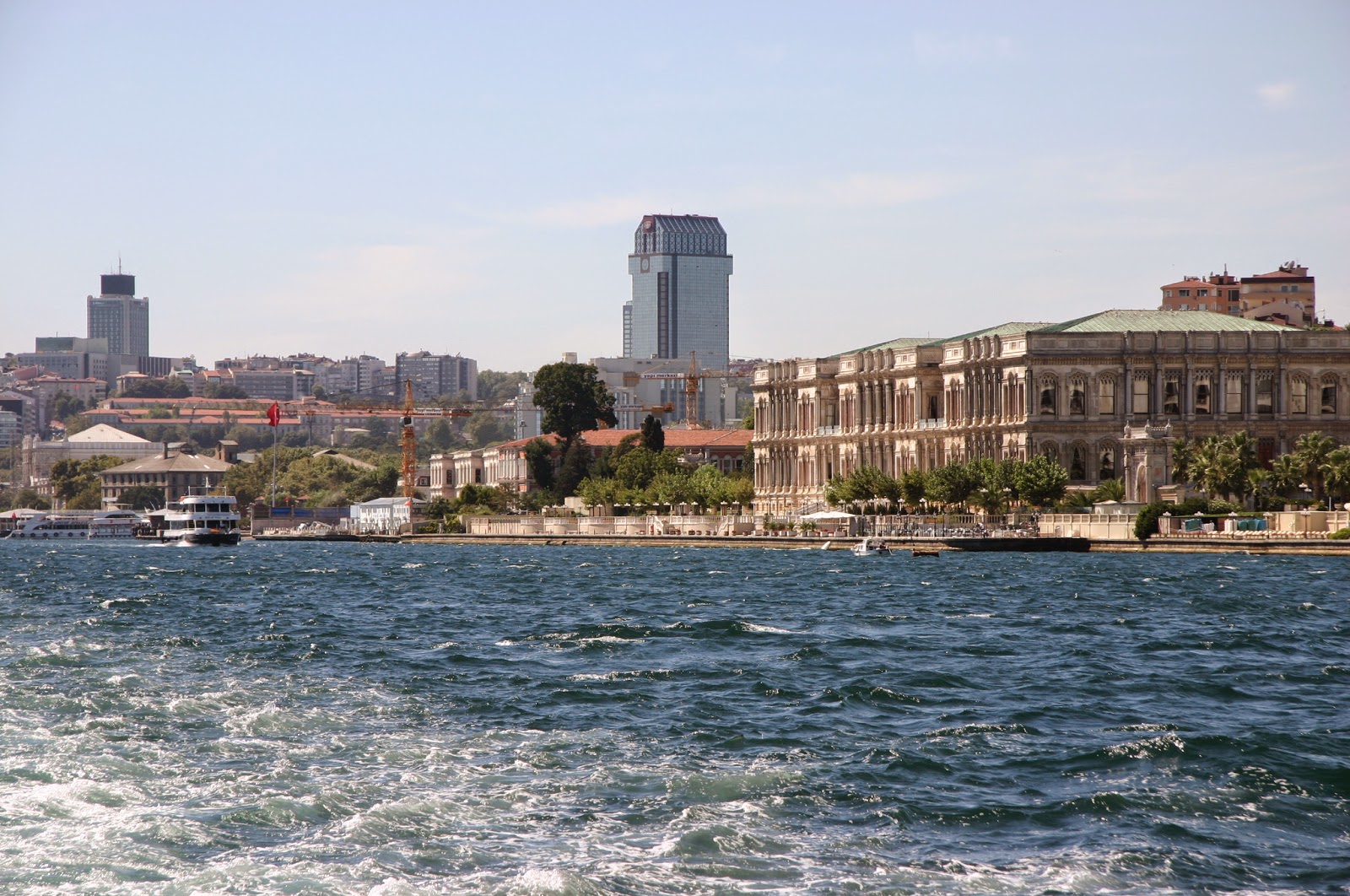 The Ottoman Ciragan Palace on the Bosphorus from the 19th century and the tall glass building of the Ritz Carlton Hotel. 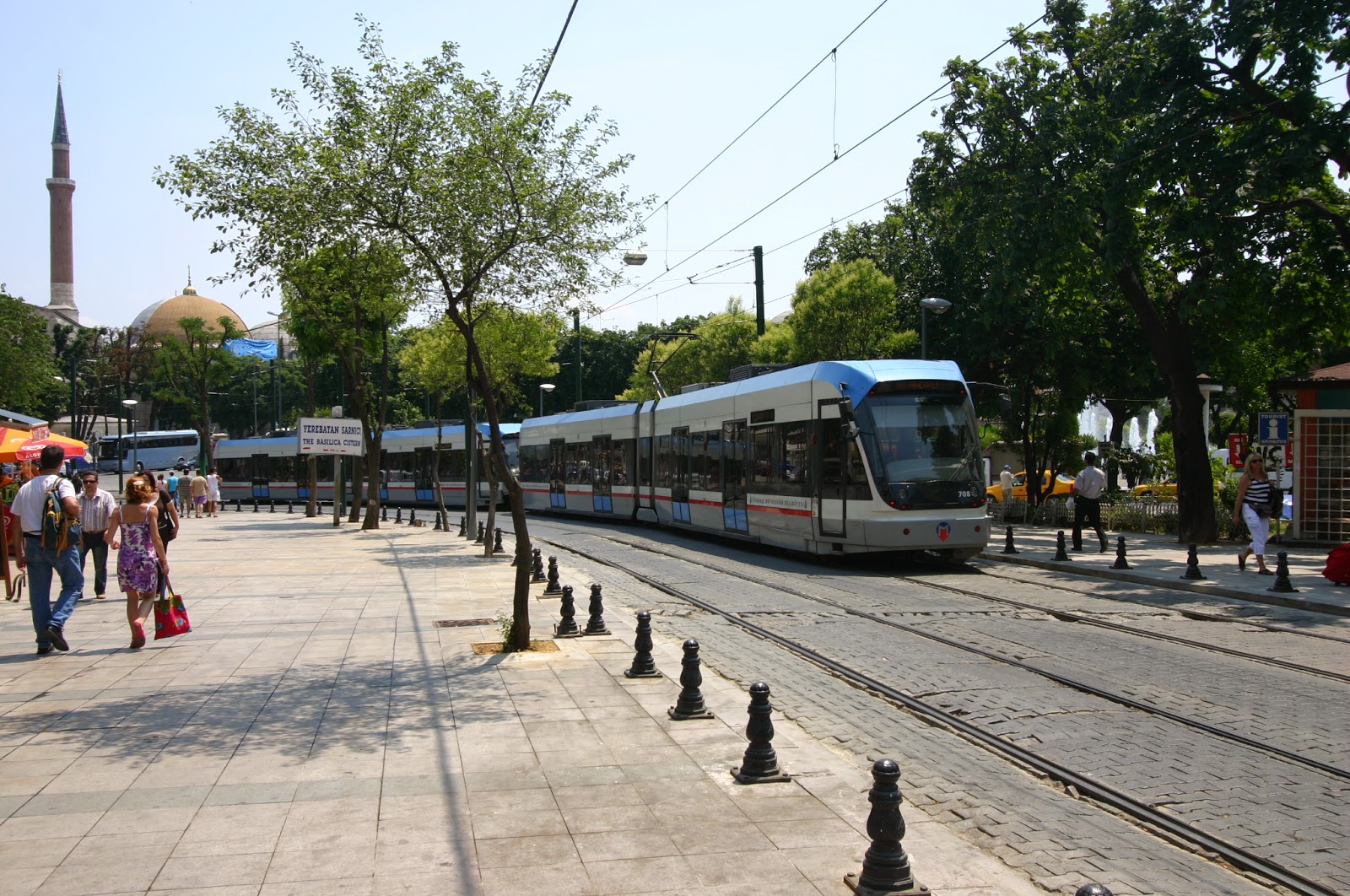 If Istanbul was a forest this tram would be my vine!
It is a surprising fact that while Turkey is the 6th most visited destination of the world and Istanbul being the 10th, very few Americans visit it. Spanish, Italian, French are rushing into Turkey while Americans travelers are rushing in their countries!
Last but not least about travel to Istanbul is the hospitality of the Turks who will never make you feel awkward for not speaking Turkish. On the contrary, many will be happy to exchange a conversation with you. 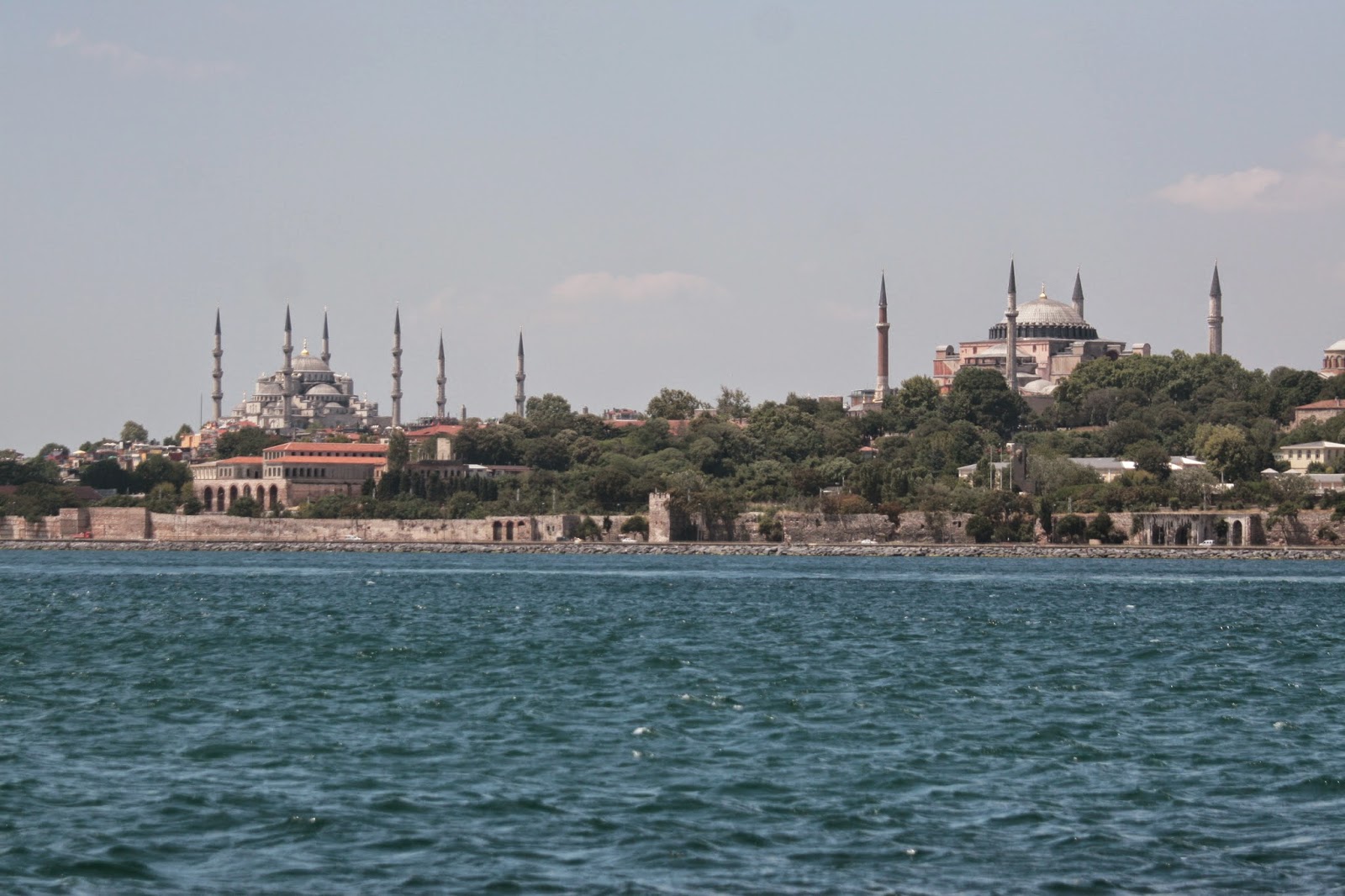 One of my favorite angles of the Old Town, photo was taken from the Asian coastline of Istanbul looking west. Hagia Sophia Cathedral (6th century Byzantine) is on the right, Blue Mosque (17th century Ottoman) is on the left. Remnants of the Byzantine city wall can be seen along the water.
If I can suggest just one thing for traveling to Istanbul: I wouls suggest you to plan well! City is huge and there is so much to see and do, without a plan you may miss the best parts.
The guide book I co-authored, Rick Steves Istanbul has the best self guided walks of the city. About finding a good place to stay in Istanbul, you can refer to one of my earlier articles in this blog: Where to stay in Istanbul? And, you can read more about transportation in the article dated December 26, 2014, “Public transportation in Istanbul”.
Happy Travels,
Lale Surmen Aran
* Looks like one of my future entries will be about the Turkish language.
Lale Sürmen Aran's Travel Site © 2015. All rights reserved.
Blog Desing By Perim Öktem
Lale Sürmen Aran's Travel Site © 2015.